I saw the photo montage go by on my Facebook feed of What the World Eats.  Each photograph of a family in a different country with all the food that they eat in a week.  It took me by surprise, really.  Many of the countries that I thought would have healthier food choices did not.  And the ones that I would consider healthy had little more than five bags of staples like beans and rice.  What really astounded me though was the sheer amount of processed food.  My goodness, big companies have made their way around the world.  One photo showed liters and liters of Pepsi.  Packages of pre-cut meats.  Boxes and boxes of processed foods.  And some produce.  It made me think, What am I eating? What would our photograph look like?

Just for a day I began photographing my meals.

When we had our practically off-grid farm there for a bit, we were practically self-sufficient.  We had a root cellar filled with fruits and vegetables.  A freezer full of local meat and my own cheese curing from my own goats.  What that photo wouldn’t show is all the food that went to feed the animals that I consumed.  (Nor would it show the chronic heartburn, weight gain, and gout.)  What do I eat now? was a question that would ultimately help me see what I could make myself and just how much processed food I consumed.

Breakfast- I love a bowl of cereal for breakfast.  I buy the organic box of raisin granola for $4-$5 and it feeds me for five days with roughly four cups of cereal in the box.  I wrote a book many years ago called, Gone Vegan, and I pulled out that trusty manual to find my old granola recipe.  It is so good and it made doubled the granola in roughly 40 minutes for a fraction of the price.  One less box I need to send to recycling and one less plastic insert that goes in the trash. 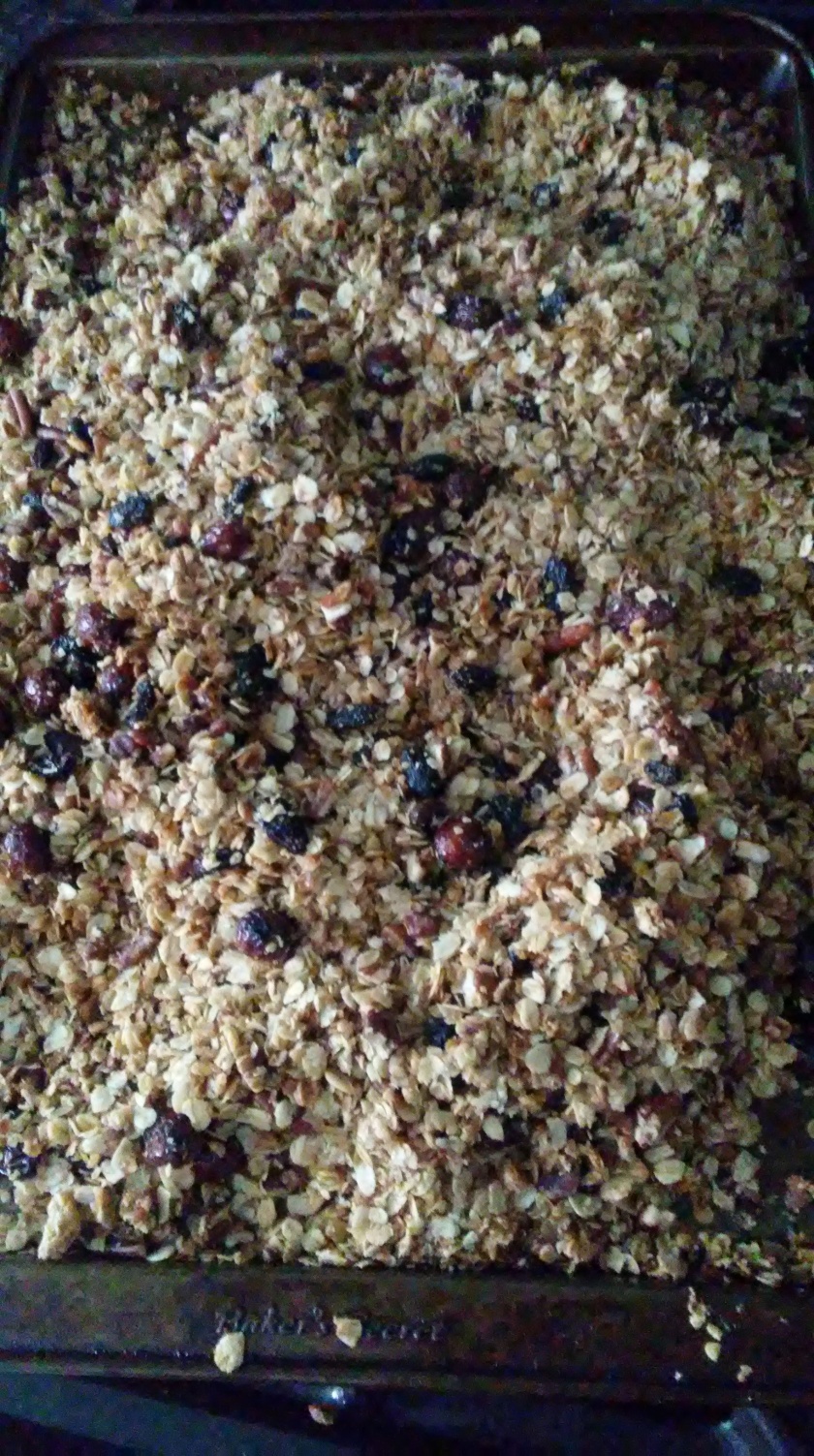 Spray a cookie sheet with oil and after mixing all ingredients well, pour onto cookie sheet.  Drizzle with agave or maple syrup.  Bake for 30 minutes, stirring half way through.  Then add 1 cup of nuts and 1 1/2 cups of dried fruit (I used pecans, raisins, and cranberries) and continue to cook for 5 more minutes.  Stir a few times after it comes out of the oven as it’s cooling to keep it from sticking or clumping.

Now, this is delicious with almond milk.  And indeed, I can make my own cashew, hemp, or almond milk.  But, I usually buy the carton because it lasts longer.

Lunch- For lunch I had a power smoothie.  My Vitamix is ten years old (a new one is on my wish list) so I have to juice the big stuff first.  I put in the juicer a large leaf of aloe, 3 apples, 3 carrots, a big handful of chard, and a chunk of ginger and turmeric.  Then I poured that into the Vitamix and added a big banana, spirulina, maca, hemp protein powder, pumpkin pie spice, frozen berries, a dollop of both peanut butter and coconut oil.  A drizzle of maple syrup or agave and on the machine goes.  I split it in half and send my husband with his tomorrow in his lunch and drink my half with a few crackers and vegan cream cheese and jam that I preserved.  I could certainly make my own crackers but they aren’t quite as good as organic Ritz style.  But maybe I will work on that this week!  I do buy packaged vegan cheeses and meats.  The packaging is far less waste than the actual act of raising meat and dairy and the karmic value of going vegan is astronomical as well as the lessened impact on the environment.

Dinner- Pizza with a homemade, 15 minute crust.  I topped it with my own preserved tomato sauce, vegan mozzarella and cream cheese, a ton of spices, and a bunch of delicious vegetables. 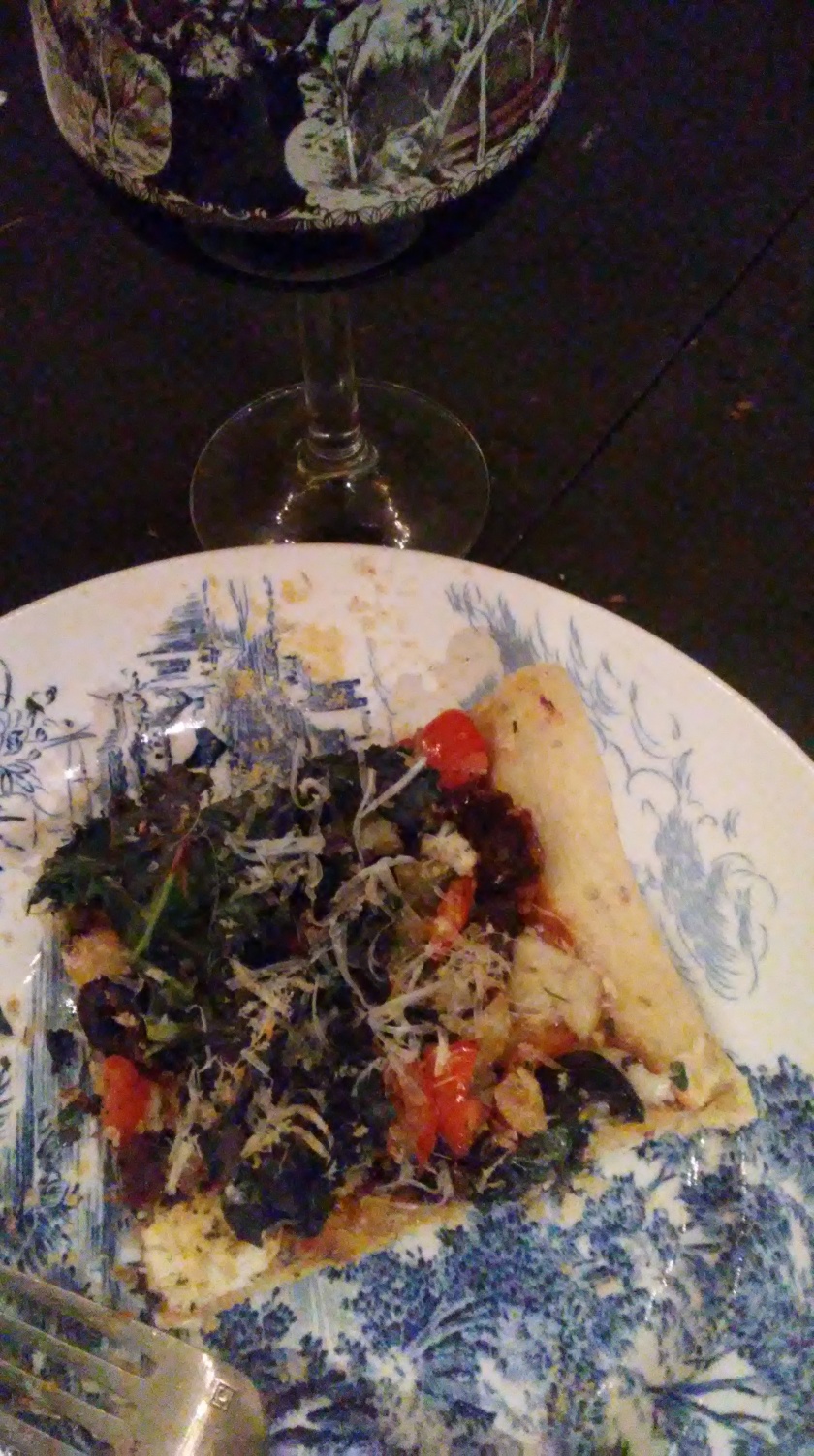 The next night we had vegan carne asada with crisp oven fries, cashew queso, Beyond Meat crumbles, guacamole, tomatoes, and homemade red chile.

The Big Picture– Well, I have a bit to go, don’t I?  But being aware is the first step to doing better.  So, yes, we use some packaged items and some of them could be made and some of them are the lesser of evils.  But produce is a large part of our diet and so are healthy grains.  I grow all of our produce for the four months we garden and I preserve a few hundred jars of produce a year.  This year with my expanded gardens and vertical gardening techniques, I hope to produce doubled what I have been.  This continues to increase our nutrition intake and lessen our footprint even more.  Preparing more ethnic dishes, like Indian and Mexican food allows the use of more beans and pulses, further increasing our health, and costs less environmentally and monetarily.

As Americans especially, we have a lot of unwiring to do.  I hope in a year or so to look more like the family from Guatemala (sans meat) then the one from America. 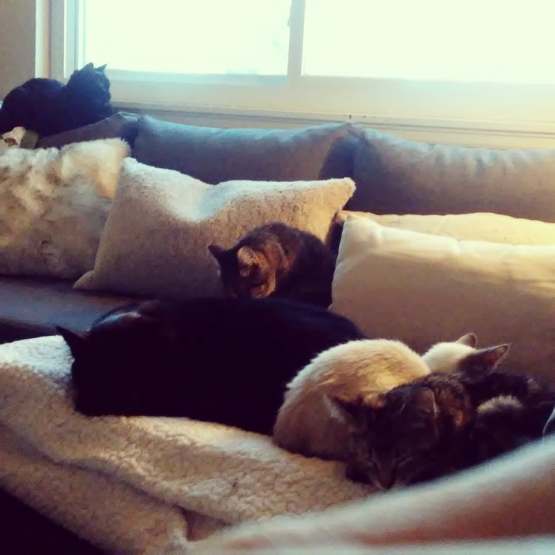